Lahore, 21 May 2019: WWF-Pakistan organized a seminar on crop residue burning and the issue of smog at a local hotel in Lahore. The aim of the event was to establish a consensus between the relevant public and private sector on the roles, responsibilities and actions that need to be taken to reduce discourage crop residue burning and by extension smog. The half-day seminar was attended by corporate partners, journalists, academia, industry practitioners and the farming community from across Pakistan.

Hammad Naqi Khan, Director General, WWF-Pakistan, while welcoming the participants said, “Lahore is among the ten most polluted cities in the world in terms of air quality, according to air quality monitor AirVisual. Air pollution caused by traffic, industries, crop burning and burning of solid waste are major contributors of smog. Urban air pollution in Pakistan is among the world’s most severe, significantly damaging human health, quality of life, and impacting the economy and environment.”

Tanvir Jabar, Director General, Environment Protection Department, Government of Punjab, spoke about the sources of smog (brick kilns, industries, agriculture and transportation sector), including the role of agriculture/crop residue burning in creating it.

Dr. Anjum Ali  Buttar, DG Agriculture Extension gave a detailed analysis of the direct and indirect  losses due to the practice of crop residue burning.  He also took the opportunity to elaborate upon the range of initiatives that Agriculture Extension had taken in order to resolve this pervasive issue as well as the efficient management of crop stubble.

Rafay Alam, Pakistan’s leading environmental lawyer stated that it is the need of the hour to control crop burning. This can be achieved by introducing long-term and multi-sectoral solutions that must outlive the political cycle. He discussed the need of an air quality vision that unites policymakers. He stated “Punjab region in general is extremely prone to the hazards of smog. While the transportation and energy sector qualify as the leading contributors of smog, crop residue burning also contributes to this cause.”

Dr Ehsan Ali, Director Punjab Bio Energy Institute, presented a feasibility analysis of the alternative use of crop residue, such as rice husk, in the production of energy, According to him bio-energy is of utmost importance for the environment as it is a step towards materialising the intended nationally determined contribution (INDC) that Pakistan has submitted in accordance with the Paris agreement. 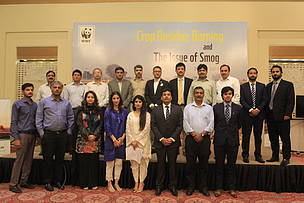